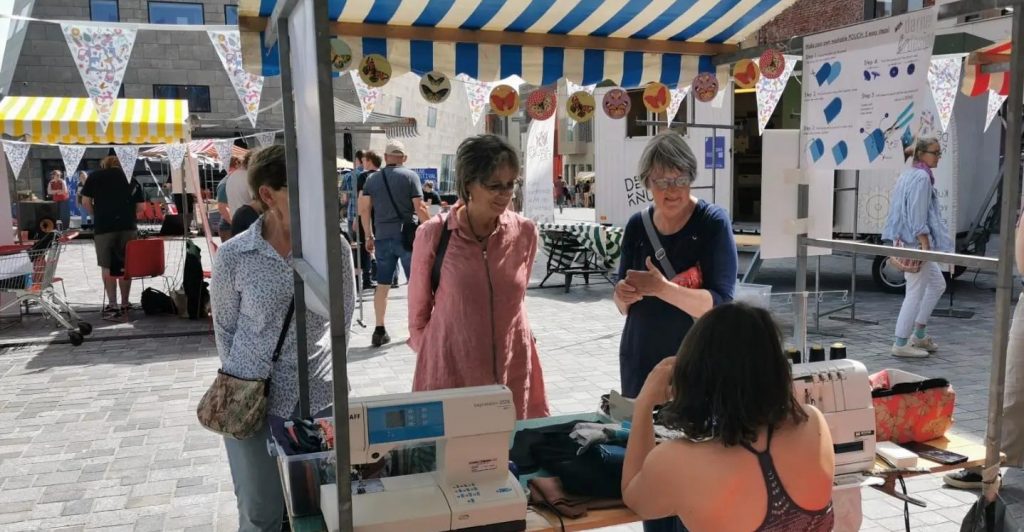 Taming the cultural taboo by talking about periods

The Coles notes: A pragmatist maker becomes an advocate by talking about the uncomfortable.

Honestly, I didn’t realise when I started making reusable pads just how uncomfortable talking about periods and period products could be. Even just describing what the product does makes people uncomfortable. Of course we can’t talk about the product use-case literally, “it catches the blood that comes out of a vagina” …. Blood, vagina…. Somehow two words that are super triggering. So you have to talk about “period products” or “what you use monthly” or something that somehow uses less loaded wording. It is a reflection of our culture.

Talking about women’s health has a cultural tendency to be taboo, and not just about periods. About birth, breastfeeding, miscarriage- so common yet somehow still we recoil at a long chat about these things in public. That needs to change. Don’t we owe it to ourselves to normalise and support these parts of life? How can some of the most universal parts of our experience be so hard to talk about?

Equal rights for women and girls are a part of the Dutch political agenda. In practice though, the culture is still not over the tipping point of being able to discuss periods without that twinge of triggering discomfort. My experience with selling the products of darner design have been an eye opener about the culture surrounding women’s health. People only shamefully discuss their choices surrounding periods, and even more shamefully: incontinence. If you don’t yet know the word, incontinence is a loss of urine at involuntary moments. It’s common for people of all ages, especially after childbirth. But nobody talks about that, or what they do about it. Or at least not openly.

Before reusable pads, I always considered myself a maker, with the emphasis on pragmatic design. Suddenly the product I made had me talking like an advocate….

I made handbags with pockets in all the right places, or face masks that don’t fog up. I just enjoyed improving things, in just the way I needed or wanted them to be. Yet with the choice to make and sell reusable pads, still driven by a purely self-indulgent pragmatic need, I was confronted that my product was actually taboo. In my attempts to share their value, it felt as though I stumbled upon an additional role: as an advocate for women’s rights. As I talked about periods, and asked women about their choices, I realised just how much I was walking on delicate ground, but also that there was so much relief on the other side. How much freedom it gives to just talk about the universal realities of life! I realised as I was speaking that by talking about my products, I was also escaping the cultural taboo’s. It felt great.

There were also these other confronting and uncomfortable things. I learned that despite every female experiencing the need for period products: they are not always accessible (or affordable) to everyone that needs them. Period products are also not always benign- for the users themselves or for the environment. We’ve ignored the reality of our physical needs as humans for long enough, it’s time to face it: women’s bodies need a lot of care. They go through a lot, every single month, and after childbirth, after miscarriage (another way too common taboo). Are we still not fully and openly acknowledging the consequences of this reality? What does it mean for women’s ability to be active in society without access to basic feminine hygiene? We could go on a whole other tangent about the patriarchal framework of our society, but maybe it’s better to take that angle another day.

We need to stick together and help each other out. And not just women, I mean, we all wear clothes!! Why do some of us get the luxury to be out in public and others not??

If you’re a male person reading this, and you’ve got this far: I applaud you. As a wearer of clothes which are not regularly threatened by the risk of blood stain, this is probably new, or maybe confronting. I’ve also had a privileged life: my clothes don’t get stained regularly either- mainly because I can afford to pay for a solution.

As a result of my extremely privileged experience in life so far, I was never confronted with a reality that many women face: of not having access to or being able to afford basic hygiene products. To hear that many women: as many as 1 in 9 in the Netherlands; can’t afford, or don’t have access to these products was a very uncomfortable thing to hear.

Can you imagine?! Every month not being able to leave the house or go out in public because you might bleed through your clothes??? And on top of that, living in a culture that shames even talking about it.

The Armoedefonds is a Dutch charity organisation that is specifically targeting this issue. They are calling it “menstrual-poverty” or menstruatiearmoede. As a newly-identifying women’s rights pragmadvocate (pragmatist- advocate) , seems logical to get on this bandwagon. It’s part of the win-win-win-WINness of darner design’s reusable pad: it is comfortable (organic cotton top and thin design), hygienic (antimicrobial treatment and waterproof layer), it’s environmental impact (re-useable), and (maybe not so) unexpectedly: it’s women’s rights agenda. Of course I have to talk about periods to sell them, but there is more. For each set that sold, we donate a pad to the armoedefonds.

If you’re a female and considering trying these, a set of three can prevent a whole day of bloody clothes, maybe three days; and if washed and dried and used on repeat, can do the task for years to come. If you’re a male person and don’t know what do with all this uncomfortable blood-talk: it’s okay to talk about that. Even just a curious open minded discussion is better than ignoring or shaming, people of any gender can help change the culture one tiny ripple at a time- just with the attitude and thought.

The time does feel ripe for big cultural changes, with textile technology for reusables, and with the growing public awareness for environmental and human rights:  there is hope. Let’s spread it.